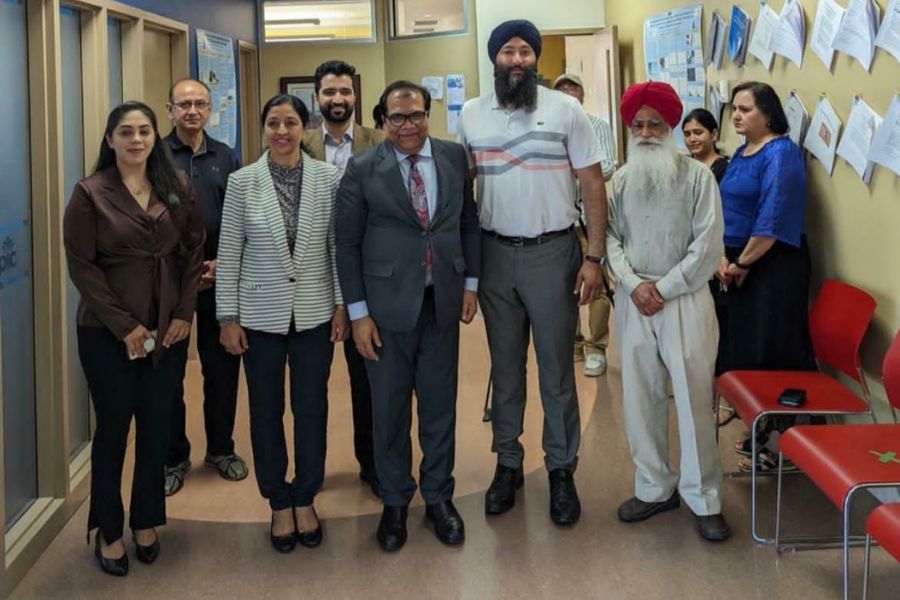 Mississauga, August 9: Canadian College of Ayurveda & Yoga Inc. (CCAY) and Parul University, from India are going to provide highest quality of hybrid course for students of Ayurveda in North America.

Following the benchmarks of training of Ayurvedic Practitioners of WHO and RAV, a very first and authentic course of Ayurveda in Canada started with the inauguration of Canadian College of Ayurveda and Yoga in Mississauga today.

President of the Treasury Board of Ontario, Prabhmeet Singh Sarkaria inaugurated the campus of Canadian College of Ayurveda and Yoga, which is offering Diploma in Ayurveda and Natural Healing.

Prabhmeet Sarkaria also accepted the request of college director Vaidya Harish Verma to help in regulating Indian medicine system in Ontario which is already listed in NOC code of Federal Government. It will be huge success of WHO and Government of India whenany Canadian state regulates it.

An initiative taken by CCAY and Parul University of India is first platform to educate people of Canada in Ayurveda. Large number of people from different segments of the society attended the ceremony and appreciated the relentless and continuous efforts of Vaidya Harish Verma.

He said that CCAY will run two years, part time, program, which is based on guidelines of World Health Organization-WHO and Rashtriya Ayurveda Vidyapeeth (RAV), Ministry of AYUSH, Government of India to give the required knowledge and skills to practice as an Ayurvedic Practitioner.

The course encompasses a variety of subjects and areas including Ayurveda basic principles, ayurvedic nutrition, ayurvedic herbal medicines, detoxification procedures, ayurvedic massage and therapies. After completing the Diploma Course students will be able to set up private Ayurveda practice or work in multi-disciplinary clinics along with other health care professionals such as physiotherapists, chiropractors, osteopaths and psychologists.

Mr Gagan Verma, the director of CCAY said the course will lead towards creating more opportunities of employment in Canada. He said classes will start in early September and he’s overwhelmed by the response CCAY is getting in terms of registrations and queries.

Vaidya Harish Verma said besides other International Associations, he’s member of Canada India Foundation (CIF) which is closely working with Consulate General of India, Toronto, to enhance the scope ayurveda through Virtual Lecture Series during the occasion of 75th Centenary of Independence of India being promoted as ‘Azadi ka Mahotsav’.

According to Dr. Geetha, WHO is creating updated version of benchmark for Ayurveda this year.

Dr. Geetha said world body is working to create Internationally terminized vocabulary for Ayurveda by year end which will be great help in research of Ayurveda in different parts of the world. Technical Officer of WHO also added that work on International Classification of diseases where Ayurveda can be beneficial has also been initiated which will be published in 2024. WHO is also developing Global International Pharmacopeia of herbal medicines.

S. Jasvir Singh, an eminent social worker praised the cause of CCAY and thanked minister for showing his interest in Ayurveda. He concluded vote of thanks by again requesting the minister to regulate the centuries old Traditional Indian Medicine System for the noble cause. He said it will help Canadians improve their health without going to hospitals and that too in natural way.

Some of the students who enrolled to the diploma also interacted with the media during the inauguration. They said that learning Indian art of Ayurveda and Yoga in Canada will save a lot of time and money. One of them said that this two year long weekend course will also ease the mental pressure of attending classes daily. He said course is fabulously designed taking care of working people like him who can work for five days and attend the online classes on Saturday and practical Sunday.

Know the Risks and Dangers Before Investing In Cryptocurrency

University of Macaria conferred Doctoral Degrees to Eminant Personalities for their contribution in their sector specific at IHC New Delhi.