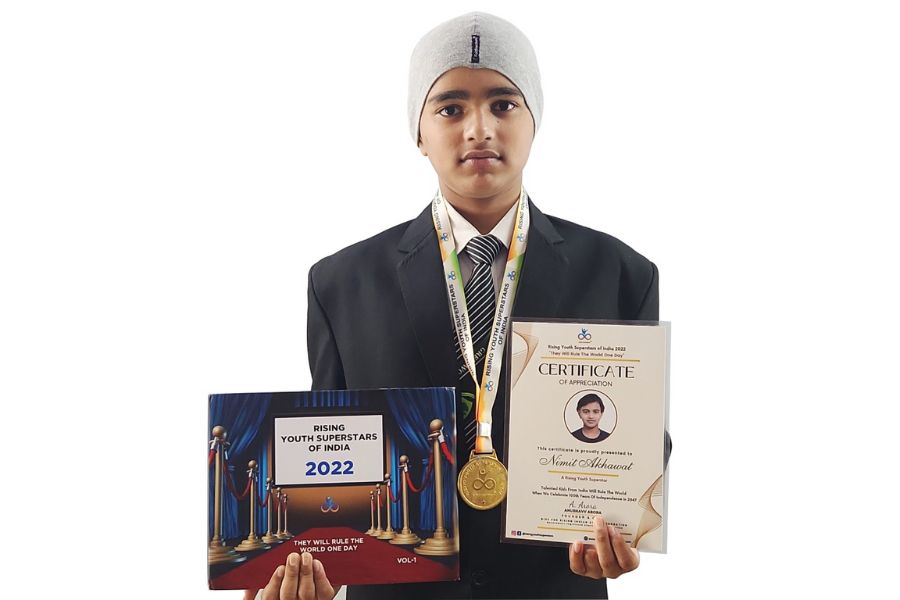 New Delhi, December 07: Soaring ambitions and unending inquisitiveness are two defining characteristics of Bengaluru-based Nimit Akhawat, who is on a continuous hunt to refine the purpose of being in life. Born in 2011 to Prashant Akhawat and Shalini Akhawat, Nimit is a Greenwood High International School, Sarjapur, Bengaluru student.

Nimit’s aspirations to explore Medical Science stemmed from a vacation he took at the age of eight when he visited his grandfather after he completed his 3rd grade. He was utterly in awe of anything and everything related to medical science. His grandfather is a retired surgeon by profession, and like every other child, Nimit loved spending time with his grandfather. As a practicing doctor, his grandfather consulted patients, and Nimit had an opportunity to observe these consultations and quench his thirst for unending inquisitiveness about human body functions, diseases, and treatments. However, the human brain is a pandora box of never-ending curiosity, and the hunt starts to discover and learn more.

After a point, it became quite noticeable that Nimit was inclined toward medical science. His motivation to learn Medical Science was his grandfather’s appreciation and his school principal’s assurance to provide him with a platform to showcase his talent. He spent hours learning more about neuroscience to present the same to his grandfather on a Whatsapp Call to get that incredible appreciation. That virtual pat on the back was like an Oscar to him.

When Della Torre approached Leonardo da Vinci to draw a human body as an illustration for a text, Da Vinci drew more than ten human bodies (despite the death of Della Torre) merely out of his curiosity to learn about human anatomy. Da Vinci’s work in the medical field is considered unrivaled even today. Nimit’s endeavor to educate himself in the field of medicine is reminiscent of Da Vinci’s endeavor to learn about and contribute to the field of medicine. He is undoubtedly a little Leonardo in his capacity.

Seeing his passion and curiosity for medical science, his parents gifted him two books initially, i.e., “The Human Body Book” and “The Brain Book”. By the age of nine, Nimit engaged himself in multiple medical learning courses, including Dr. Najeeb’s Lectures, Dr. John Campbell, Lecturio Medical Lecture Series, and Oncology (Cancer) lectures from some top IVY League Universities. By the time he was 11 years old, he had his own library of books of many disciplines. He loved those Medical Lectures and spent hours learning Neuroanatomy and Neurophysiology, Gross Anatomy – Head & Neck, Eye & Ear – Anatomy & Physiology, Microbiology, and Cardiovascular Physiology.

To direct his efforts, his parents led him to the path of primary research, as packing the brain with a lot of information has no meaning unless applied to a cause. This gave orientation to his learning with a definite purpose in Neuroscience and Brain Computer Interface research. He is continuing his quest to deep dive into Neuroscience, EEG (Electroencephalogram), Statistics, Brain Computer Interface, Machine Learning and Research Methodology to pursue his first primary research work.

Due to his exceptional talent, Nimit got featured in the “Rising Youth Superstars of India 2022”, The Child Prodigy Magazine 2022, and also bagged a record on his name with the Title “Detailed explanation of maximum medical science topics by a child” in India Books of Records (IBR).  As per IBR, “The record for giving a detailed explanation of the maximum number of medical science topics was set by Nimit Akhawat (born on February 25, 2011) of Bangalore, Karnataka. He explained 87 topics of 4 medical science branches, namely 49 topics of Neuroanatomy and Neurophysiology, 12 of Eye Anatomy and Physiology, 15 of Microbiology, 11 of Cardiovascular Anatomy and Physiology, at the age of 11 years, 7 months and 22 days, as confirmed on October 17, 2022”.

Nimit wishes to commit himself to research in the field of Neuroscience, Brain Computer Interface, and Cancer. As a near-term target, he aims to understand the science behind the Human Brain and decode the surface of information processing of the human brain. He further plans to research the biological processes involved in the onset of cancer, its growth, and its spread in the body. With this research, he wants to develop targeted treatment and prevention strategies and possibly develop a cancer treatment drug.

Nimit is not just good at studies. He loves devotional music and learning to sing and also plays tennis and cricket in his free time. He is highly disciplined and manages his academics efficiently. He also started his YouTube channel – Medical Learning with Nimit Akhawat (https://www.youtube.com/@nimitakhawat), to share his learning.

He believes everything is possible if you are committed, passionate and persistent toward achieving your goal. Age is just a number; intent to do something is the key; knowledge can be acquired. His ambitions are inspirational and would greatly benefit society when realized. His perseverance to refine his purpose is in line with the Japanese concept of “IKIGAI” i.e. “A Reason for Being in life” which means “Life with a Meaning”, something that gives a person a sense of direction and happiness. A person’s ikigai can be anything: a passion, a dream, a mission or a vocation.

At the tender age of eleven, Nimit is a great source of inspiration. He would definitely go on to achieve his dreams one day. Just like Da Vinci, this little Leonardo’s work too shall stand unrivaled someday.

University of Macaria conferred Doctoral Degrees to Eminant Personalities for their contribution in their sector specific at IHC New Delhi.