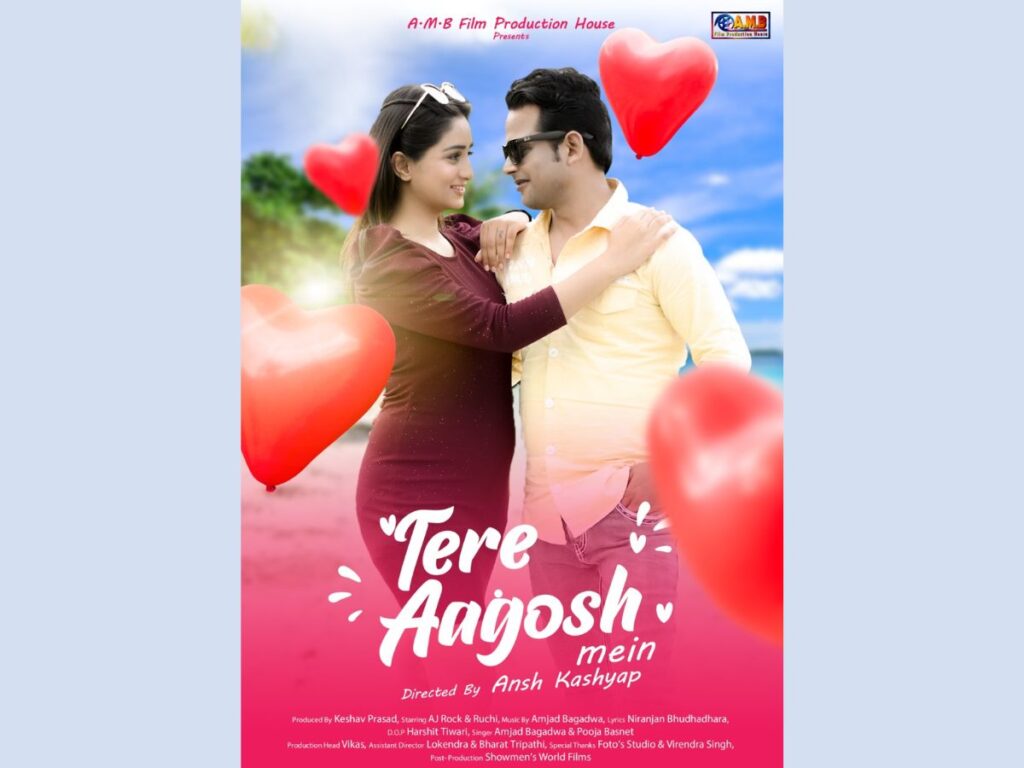 Mumbai (Maharashtra) [India], September 8: A new song is making waves in the music scene as soon as it is released into the market. Tere Agosh Mein has been great for the song as people caught onto the catchy tune. The song is sung by Amjad Bagadwa and Pooja Basnet, prominent singers who have captured people’s hearts by rendering beautiful songs. The lyrics penned by Niranjan Bhudhadara have genuinely portrayed the story that the album wants to convey. The background score and the instrumentation of the song are highlights. The song was shot in scenic locations with a picturesque backdrop making the frame look even more beautiful and worthwhile for viewers who have given immense love to the album.

The song’s teaser was released on the 27th of August with much fanfare. It was very well received; people gave amazing support from the day of the teaser release. The lead pair of the album were introduced to the crowd during the release. AJ Rock and Ruchi Singh, having portrayed a pair so much in love. The amazing response has given the production house AMB Film production to make more such melodious songs. On the 5th of September 2022, the song was released and caught the eye of several viewers until the time of going to press.

AJ Rock is quite a popular name in Bundelkhand, with several movies that have become hits under his belt, such as Ye Film Corona, Laptop, Hum Hai Samaj Sevak, and several others his credit. He has also acted in music albums Holi Morey Sange Mana le, Savare Tori Banshi and Bekhyali and has been praised for an outstanding portrayal by AJ Rock.

The incredible video was directed by Ansh Kashyap and produced by Keshav Prasad. Amjad Bagadwa, who has sung the song so beautifully and lent his voice for the album. He also happens to be the music director, making it a double whammy of sorts as the public will get to hear the music genius weave his magic in the song and composition. He has also managed to program and arrange it beautifully with production head Vikas Rai. Helming the post-production with due diligence is Showmen’s World Films.

Ansh Kashyap has many projects to entertain the audience with his immense talent. His upcoming videos include Gaon ki Modi, Mori Sanam, Khali Sa, Maahi, Ye Baarish, Baarish, and Poonam Dhillo. He has also dabbled in several yet-to-be-released web series such as Pakhand, Ghanishayam Singh Kewat, IPS Manilal Patidar, Bawaal and Sipahi. There is so much to look forward to, and Ansh cannot wait to let the public know. And hear of all he has made with so much love and dedication.

Another fantastic song called Maahi- a musical love story, has also released the teaser of the upcoming song, and it is also creating waves. This beautiful song is lead pair of Ansh Kashyap and Priyamvada Sharma. Ansh is a talented director and actor with great chemistry with the Priyamvada in the song. This song is also produced with as much love by AMB Film Production House. Waqar Zakir Hussain Siddiqui is the director, with Keshav Prasad making the video. They have roped in Keshav Kundal as music director, and singer Jaspreet Juneja has lent her voice to this beautiful melody. Virendra Singh and Vicky Rathore brilliantly do the video’s expert camera angles. Showmen’s world films are handling the entire post-production for the album, headed by Ansh Kashyap.

The lead actress in this video is Priyamvada Sharma, who has worked to reach the star status she enjoys today—Coming from Haridwar in Uttarakhand. She has worked her way from being a child artist to now a full-fledged artist after clearing three rounds of auditions. She is featuring as a lead in the album along with four other projects, including a web series.