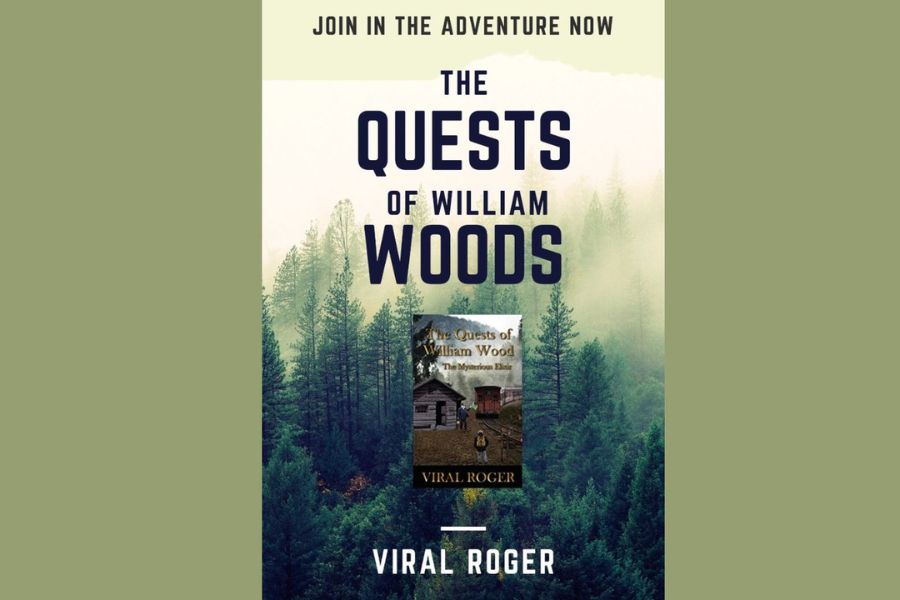 August 26: A newly launched adventure fiction is all over the news. Fictions that tend to fascinate the mind of the readers have taken a new stand with Viral Roger’s creation ‘The Quests of William Wood’. The invigorating tale spreading magic, adventure and friendship revives your usual likings of fantasies.

William Wood’s journey to the unknown land of mystery and magic takes the reader to a staggering staggering and thrilling adventure. Wood’s accidental arrival to the tiny village of Glennins hints to the element of mystification. The people he meets named Ivy and Leon become his good friends. Though he was in grief after his mother’s death, he cherished the companionship of Ivy, Leon and the girl next door. Their wanting of escaping such a strange world expresses their fear of the upcoming danger.

The powerful wizard who foretells Wood about everything, especially his past information shocks him to the core. William’s understanding of the situation, realizing the forthcoming danger and his need to solve the mystery – all hint to his traits of being a true hero.

Viral Roger’s creative and imaginative portrayal of the thickening plot, the magical theme, fictitious characters – all show her expertise in fiction writing. Storytelling to her son, the author, who is a doctor by profession, shows her skills and wonderful, innovative ideas of creating fictions.

The author has hit the bull’s eye with her equilibrium in both fiction and supernatural elements. Her book reaches excellence in the climax. The built up tension, suspense and nail-biting happenstances tell the readers about how staggering the tale is.

‘The Quests of William Wood’ by Viral Roger deserves to be counted among top-ranking fictions. The eponymous hero’s chivalry, bravery amidst all chaos and brilliance of handling the situation tactfully is splendidly portrayed. The book has all the right blend of wizardry, mystery, adventure and thrill.

The use of magical elements, craftsmanship in words and symbolism of each thing in the tale shows the excellence of the author. Viral Roger’s creative edition is precise in its storytelling. From schoolgoers to educators to youngsters to grown ups – every reader and fiction lover is sure to love this book as it’s language is intelligible and the theme is attractive.

‘The Quests of William Wood’ by Viral Roger is a harmonious fusion of mystery and magical elements. It has reached brilliant heights in penmanship. Released just a few months back, the narrative is already making buzz among readers. Thus, shelving the phenomenal book among bestsellers is undoubtedly right.

December 7: Every year, several people from different industries significantly contribute to the economic and social development. Some are...
Business